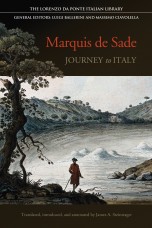 In 1775, the young Count de Sade was on the run. He had briefly fled to Italy before to escape punishment for his libertine adventures. Most notably, he had been convicted for… 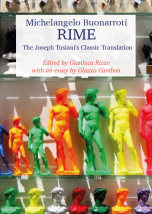 The Joseph Tusiani's Classic Translation. Edited by Gianluca Rizzo with an essay by Glauco Cambon.

This volume presents an updated version of the classic translation of Michelangelo's poetry by Joseph Tusiani, first published in 1960, that famously prompted President JFK…

Lorenzo Da Ponte (10 March 1749 - 17 August 1838) was born Emanuele Conegliano in Ceneda, in the Republic of Venice (now Vittorio Veneto, Italy). He was Jewish by birth, the eldest of three sons. In 1764, his father, the widower Geronimo Conegliano, converted himself and his family to Roman Catholicism in order to remarry. Emanuele, as was the custom, took the name of Lorenzo Da Ponte from the Bishop of Ceneda who baptised him. Thanks to the bishop, the three brothers studied at the Ceneda seminary. The bishop died in 1768, after which Lorenzo moved to the seminary at Portogruaro, where he took Minor Orders in 1770 and became Professor of Literature, and was ordained a priest in 1773. He began at this period writing poetry in Italian and Latin, including an ode to wine, Ditirambo sopra gli odori.

In 1773 he moved to Venice, where he made a living as a teacher of Latin, Italian and French. Although he was a Catholic priest, the young man led a dissolute life. While priest of the church of San Luca, he took a mistress, with whom he had two children.

Lorenzo Da Ponte moved to Gorizia, then part of Austria, where he lived as a writer, attaching himself to the leading noblemen and cultural patrons of the city.

With the help of Salieri, Da Ponte applied for and obtained the post of librettist to the Italian Theatre in Vienna. Here he also found a patron in the banker Raimund Wetzlar von Plankenstern, benefactor of Wolfgang Amadeus Mozart. As court librettist in Vienna, he collaborated with Mozart, Salieri and Vicente Martìn y Soler. Da Ponte wrote the libretti for Mozart's most popular Italian operas, The Marriage of Figaro (1786), Don Giovanni (1787), and Così fan tutte (1790).


In the case of Figaro, Da Ponte included a preface to the libretto that hints at his technique and objectives in libretto writing, as well as his close working with the composer:


With the death of Austrian Emperor Joseph II in 1792, Da Ponte lost his patron - he had already been formally dismissed from the Imperial Service in 1791, due to intrigues. He received no support from the new Emperor, Leopold. He could not return to Venice, from which he had been banished until the end of 1794. In 1792 Da Ponte travelled via Prague to London, accompanied by his companion Nancy Grahl (with whom he eventually had four children); in 1803 he became librettist at the King's Theatre, London. He remained based in London undertaking various theatrical and publishing activities until 1805, when debt and bankruptcy caused him to flee to the United States in 1805 with Grahl and his children.

In the United States, Da Ponte settled in New York first, then Sunbury, Pennsylvania, where he briefly ran a grocery store and gave private Italian lessons. He returned to New York to open a bookstore. He became friends with Clement Clarke Moore, and, through him, gained an appointment as the first professor of Italian literature at Columbia College. He was the first Roman Catholic priest to be appointed to the faculty, and he was also the first to have been born a Jew. In New York he introduced opera and produced a performance of Don Giovanni (1825).[1] He also introduced Gioachino Rossini's music in the U.S., through a concert tour with his niece Giulia Da Ponte.

In 1828, at the age of 79, Lorenzo Da Ponte became a naturalized U.S. citizen. In 1833, at the age of eighty-four, he founded the first opera house in the United States, the New York Opera Company. Owing to his lack of business acumen, however, it lasted only two seasons before the company had to be disbanded and the theater sold to pay the company's debts. It was, however, the predecessor of the New York Academy of Music and of the New York Metropolitan Opera.

In 2009 the Spanish director Carlos Saura released his Italian film Io, Don Giovanni, a somewhat fictionalized account of Da Ponte, which attempted to link his life with his libretto for Don Giovanni.