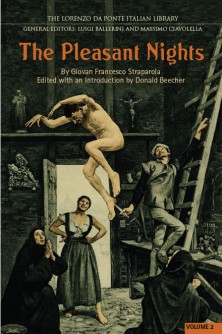 Renowned today for his contribution to the rise of the modern European fairy tale, Giovan Francesco Straparola (c. 1480–c. 1557) is particularly known for his dazzling anthology The Pleasant Nights. Originally published in Venice in 1550 and 1553, this collection features seventy-three folk stories, fables, jests, and pseudo-histories, including nine tales we might now designate for ‘mature readers’ and seventeen proto-fairy tales. Nearly all of these stories, including classics such as ‘Puss in Boots,’ made their first ever appearance in this collection; together, the tales comprise one of the most varied and engaging Renaissance miscellanies ever produced. Its appeal sustained it through twenty-six editions in the first sixty years.

This full critical edition of The Pleasant Nights presents these stories in English for the first time in over a century. The text takes its inspiration from the celebrated Waters translation, which is entirely revised here to render it both more faithful to the original and more sparkishly idiomatic than ever before. The stories are accompanied by a rich sampling of illustrations, including originals from nineteenth-century English and French versions of the text.

As a comprehensive critical and historical edition, these volumes contain far more information on the stories than can be found in any existing studies, literary histories, or Italian editions of the work. Donald Beecher provides a lengthy introduction discussing Straparola as an author, the nature of fairy tales and their passage through oral culture, and how this phenomenon provides a new reservoir of stories for literary adaptation. Moreover, the stories all feature extensive commentaries analysing not only their themes but also their fascinating provenances, drawing on thousands of analogue tales going back to ancient Sanskrit, Persian, and Arabic stories.

Immensely entertaining and readable, The Pleasant Nights will appeal to anyone interested in fairy tales, ancient stories, and folk creations. Such readers will also enjoy Beecher’s academically solid and erudite commentaries, which unfold in a manner as light and amusing as the stories themselves.