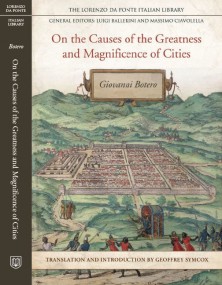 On the causes of the greatness and magnificence of cities

The first treatise ever written on the sociology of cities, On the Causes of the Greatness and Magnificence of Cities (1588) marked a radical departure from previous literature on urban centres. It provided a revolutionary analysis of how cities function, and of the political, economic, demographic and geographic factors that cause their growth and decline. Noteworthy too is Botero’s strikingly original use of sources in his analysis: moving beyond familiar classical and biblical references, he drew groundbreaking insights from reports by travelers and missionaries about cities in the non-European world, especially in China.

Though seminally important to the history of urban studies, On the Causes of the Greatness and Magnificence of Cities has not been available in a modern translation until now. This edition of the treatise – which includes an introduction by Geoffrey W. Symcox on the intellectual context within which it was conceived – is a must-read for anyone interested in the life of cities both historical and contemporary.