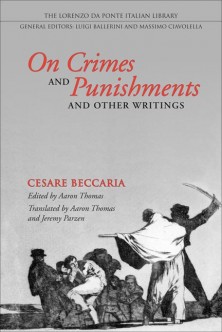 On crimes and punishments and other writings

Published in 1764, On Crimes and Punishments by Cesare Beccaria (1738-1794) courted both success and controversy in Europe and North America. Enlightenment luminaries and enlightened monarchs alike lauded the text and looked to it for ideas that might help guide the various reform projects of the day. The equality of every citizen before the law, the right to a fair trial, the abolition of the death penalty, the elimination of the use of torture in criminal interrogations—these are but a few of the vital arguments articulated by Beccaria.

This volume offers a new English translation of On Crimes and Punishment alongside writings by a number of Beccaria's contemporaries. Of particular interest is Voltaire's commentary on the text, which is included in its entirety. The supplementary materials testify not only to the power and significance of Beccaria's ideas, but to the controversial reception of his book. At the same time that philosophes proclaimed that it contained principles of enduring importance to any society grappling with matters of political and criminal justice, allies of the ancien régime roundly denounced it, fearing that the book's attack on feudal privileges and its call to separate law from religion (and thus crime from sin) would undermine their longstanding privileges and powers.

Long appreciated as a foundational text in criminology, Beccaria's arguments have become central in debates over capital punishment. This new edition presents Beccaria's On Crimes and Punishments as an important and influential work of Enlightenment political theory.