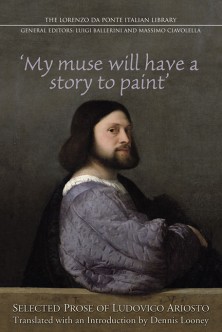 My muse will have a story to paint: selected prose of Ludovico Ariosto

Ludovico Ariosto, best known for his 1516 epic poem Orlando furioso, was one of the great writers of the Italian Renaissance. In this collection, Dennis Looney assembles a diverse compendium of Ariosto's prose, including his 214 Letters and a satirical piece, Herbal Doctor.

Ariosto's correspondence paints a detailed portrait of the world he lived and wrote in. While some letters illuminate his day-to-day life, including his work as a provincial commissioner for the ruling Este family of Ferrara, others shed light on the composition and production of his poems and plays, allowing a glimpse of the man in his creative workshop. Herbal Doctor, a parody of humanism in general and neoplatonic philosophy in particular, may mark a defense of Ariosto's decision to turn away from the philological world of his contemporaries in order to pursue a different kind of learning.

Looney's elegant, careful translation provides us with the first extensive selection of Ariosto's prose works in English, and enriches our understanding of one of Italy's most important Renaissance writers.