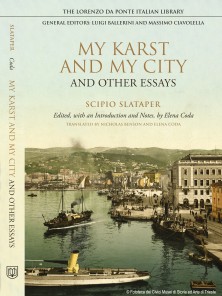 My Karst and My City and Other Essays

Scipio Slataper (1888-1915) is one of the most prominent voices of Austro-Hungarian Trieste, a city that became Italian only at the end of World War I and whose identity was defined both by its Italian irredentist aspirations and by its cosmopolitan environment, where Slavic, Germanic and Italian cultures intersected. All of Slataper’s oeuvre is influenced by and reflects on Trieste’s unique cultural and political milieu. His essays on Trieste before the Great War are essential to understand this particular geo-political moment and to grasp the cultural complexity of this multi-ethnic environment. Slataper is one of the few writers from the area who tried to understand and express the paradoxical and contradictory elements that infused the life of his city without falling into the facile nationalistic discourse in vogue at the time. However, after the assassination of the Archduke Ferdinand in 1914 in Sarajevo, Slataper, who, up to that point, had been very skeptical of the irredentist movement, moved to Rome and joined the interventionist cause. When Italy declared war to Austria, he enlisted as a volunteer in the Italian army and died in action near the city of Gorizia in 1915. The essays on Trieste and the political articles included in this translation offer the reader a unique insight into Slataper’s political and intellectual development and shed a new light on the irredentist and interventionist ideologies that dominated the European cultural and political discourse at this time. Slataper’s major literary achievement, My Karst and My City, a fictionalized, lyrical autobiography, translated here by Nicholas Benson in its entirety, offers a unique example of Italian modernist narrative, one that is influenced both by Slataper’s collaboration with the Florentine journal La Voce, and by the Germanic and Scandinavian literature that he absorbed while living in Trieste. Benson is the translator of volumes by Attilio Bertolucci and Aldo Palazzeschi, and the recipient of an NEA Translation Fellowship. My Karst, together with the excerpts from his reflections on Ibsen and other critical essays included here, add a new voice and a different dimension to our understanding of European Modernism. These translations show how much Slataper participated in a wide variety of philosophical and literary concerns that were important in Europe at that time. He reflects on the ethical and sociological role of literature at a time of fragmentation and identity crisis; he exposes the alienation of the modern individual living in a multi-ethnic metropolis and reflects on the impossible nostalgia for a world of coherence and totality. The exhaustive introduction and explicatory notes offer the necessary cultural, political and literary background necessary to understand the complexity and originality of Slataper’s work.