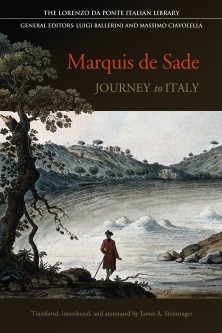 In 1775, the young Count de Sade was on the run. He had briefly fled to Italy before to escape punishment for his libertine adventures. Most notably, he had been convicted for the attempted murder of two prostitutes—more likely sickened from an excessive dose of the aphrodisiac Spanish fly—and for sodomy with his valet after a night of libertine revelry in Marseille in 1772. Now the authorities were closing in on him again after rumors of orgies involving underage girls reignited their ire. This time, Sade’s impromptu escape became not only an opportunity to undertake the “grand tour” of Italy, an aristocratic rite of passage, but also to make his first extended foray into what would become, after many years of imprisonment upon his return to France, a renowned, often reviled, and latterly celebrated writing career.

Sade imagined his Voyage to Italy as a philosophical travel guide. Alongside observations on where to go and what to see would be analyses of local customs and institutions, of history and politics, of natural phenomena and the development of the arts. And while Sade at the time of his journey to Florence, Rome, and Naples was not the extreme libertine fantasist that he would become—although clearly he already had a taste for the libertine lifestyle—his observations and ruminations in Italy frequently foreshadow his eventual literary path. More importantly, in the lives of the Roman emperors, in the excavations of Pompeii, in the machinations and misdeeds of pontiffs, the power struggles of the Medici, and in a host of cultural practices and historical episodes, Sade would find his future material: metamorphosing objects of philosophical critique into the stuff of Gothic horror, sexual fantasy, and trenchant satire. At the same time, the reader will find in Sade’s account of his journey remarkable portraits of three major Italian cities and their environs, descriptions of aristocratic customs and popular entertainments, and a sense of what being a tourist in eighteenth-century Italy was like, from scams, rough roads, and unreliable guidebooks to learned interlocutors, balls, and nights at the opera.

Presented here are translations of the completed parts of Sade’s Voyage to Italy along with his extensive dossiers of notations, sketches, and plans that provide a fascinating glimpse into Sade’s developing mind. Explanatory notes and a critical introduction provide crucial biographical, historical, literary, and intellectual context.