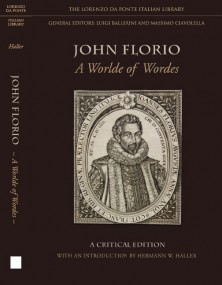 John Florio: a worlde of wordes

A Worlde of Wordes, the first-ever comprehensive Italian-English dictionary, was published in 1598 by John Florio. One of the most prominent linguists and educators in Elizabethan England, Florio was greatly responsible for the spreading of Italian letters and culture throughout educated English society. Especially important was Florio’s dictionary, which – thanks to its exuberant wealth of English definitions – made it initially possible for English readers to access Italy’s rich Renaissance literary and scientific culture.