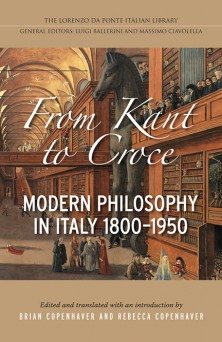 From around 1800, shortly before Pasquale Galluppi's first book, until 1950, just before Benedetto Croce died, the most formative influences on Italian philosophers were Kant and the post-Kantians, especially Hegel. In many ways, the Italian philosophers of this period lived in turbulent but creative times, from the Restoration to the Risorgimento and the rise and fall of Fascism.

From Kant to Croce is a comprehensive, highly readable history of the main currents and major figures of modern Italian philosophy, described in a substantial introduction that details the development of the discipline during this period. Brian P. Copenhaver and Rebecca Copenhaver provide the only up-to-date introduction in English to Italy's leading modern philosophers by translating and analysing rare and original texts and by chronicling the lives and times of the philosophers who wrote them. Thoroughly documented and highly readable, From Kant to Croce examines modern Italian philosophy from the perspective of contemporary analytic philosophy.